Cristiano Ronaldo is struggling to hire a chef to cook for him and his family at their home on the Portuguese Riviera.

The MailOnline have revealed that Ronaldo wants to hire someone for the house which has been dubbed as his ‘retirement home’, which is set to be finished in June.

Some of the vacancies – which includes a £4,800-a-month butler – have been filled already, but others such as the chef still need to find the perfect candidate. Ronaldo has reportedly designed part of his house to accommodate for the preparation of the Japanese delicacy: sushi.

But, as with all sushi preparation areas in any house, the question of who is going to prepare the food for Ronaldo, his partner Georgina Rodriguez and their five children is proving to be quite the stress.

Although sushi is a popular form of cuisine in the Ronaldo household his mother Dolores Aveiro revealed that his favourite fish is in fact bacalhau a bras, which is a traditional Portuguese dish made with salt cod, potatoes and eggs.

Aveiro even revealed – probably to Ronaldo’s annoyance – on Portuguese TV last year that her son is also partial to a pizza once a week but compensates for it by doing ‘loads of sit-ups’ afterwards. Ronaldo won’t need the chef straightaway as he continues to live life in Saudi Arabia after his move to Al Nassr.

He and his family are currently staying at the Four Seasons Hotel – one of the tallest buildings in the country – in Riyadh, where he has been gifted one of the best suites available. 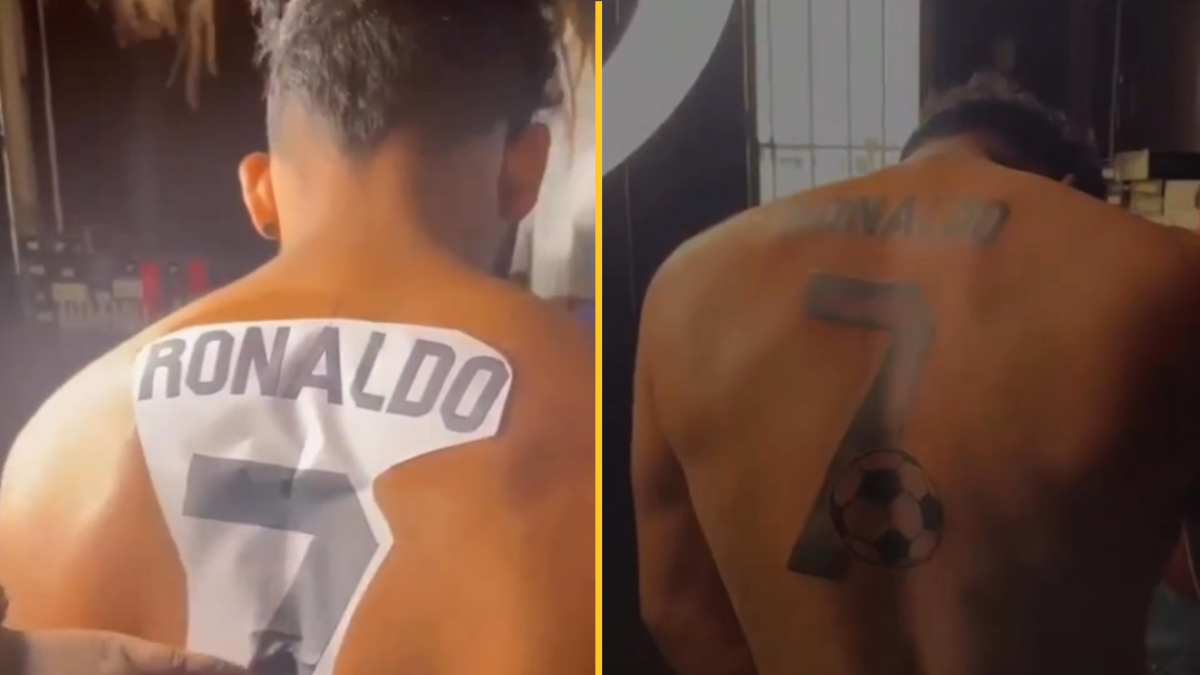 Meanwhile, a Cristiano Ronaldo super-fan has shown his support for the five-time Ballon d’Or by getting his name and number tattooed on his back.

Parthiban from India got the tattoo on his back as well as his name at the top as well as the number seven – Ronaldo’s famous shirt number – below.

Ronaldo himself doesn’t have any tattoos. It’s believed that he doesn’t have them so that he is able to give blood regularly. The tattoo appears to have the same font that the LaLiga used, where Ronaldo broke endless records during his time at Los Blancos.

Parthiban shared the post on Instagram and explained that he has gone to extreme lengths to show his love for the 37-year-old, even admitting to crying when Portugal were knocked out of the World Cup in Qatar.

“I am a huge Ronaldo fan; I love his attitude and his hard work,” he told Newsflash.

“He also came from a middle-class family and I can relate to him. He made his country proud and he made Portugal a well-known country around the world. He doesn’t have any bad habits. These qualities and his character made me a fan of him.

“I admire him most, so I decided to tattoo his name and number. I know Ronaldo doesn’t like tattoos, but I tattooed for myself and I felt heartbroken when Portugal lost in the World Cup. I was emotional when he cried.

“I posted the tattoo video on Instagram and shared it with some pages. It went viral, which I totally didn’t expect it to be.”